I’ve used a butane cook stove on boats since 2007. They are easy to use, fairly foolproof and inexpensive. The butane fuel is easy to find. Their limiting issue is the gas is heavier than air and a hazard to use on a boat as butane sinks into the bilge becoming an explosion hazard.

SWALLOW came to me with a Max Burton butane model that was working fine until this mid-to-late summer when the lever that locks the butane cartridge into the stove started to become stiff. As the summer progressed I needed to push the canister into place along with using the lever. The stove was obviously ready for replacement.

A replacement butane stove was considered, though I really wanted a stove that had the added safety of pot holders and a fuel that was easier/safer to store and use. I know many folks that use the Origo non-pressurized alcohol stoves. Their comments are mostly positive. The two usual complaints are: smelly when the stove is burning and a cooler flame resulting in longer cooking times. Some also mention that the fuel is expensive, the flame is almost invisible so care must be taken to assure the stove is out after use, and the combustion of alcohol releases a lot of water into the cabin. Bluewater cruisers mention that denatured alcohol fuel can be difficult to find.

Denatured alcohol stove fuel is safer than gas as alcohol evaporates lighter than air so it doesn’t collect in the bilge; and an alcohol fire can be smothered with water. The Origo is a non-pressurized stove so there is no priming and significantly less likelihood of flame flareups.

After comparing positives and negatives I choose to get an Origo. This isn’t all that easy as Origo was purchased by Dometic a few years ago whom then discontinued all the alcohol stoves! The Origo isn’t an inexpensive purchase, retail about $275-$300, and now most chandleries are out if stock.

Being a liveaboard with no job my preference was always to look for an Origo at a used boat part chandlery or or Craigslist. Luck was in my side as a single burner stove was listed craigslist when I started shopping. The stove looked unused and the asking price was fair. My dad assisted by collecting the stove for me – I was in the Gulf Islands and the seller in central Puget Sound. 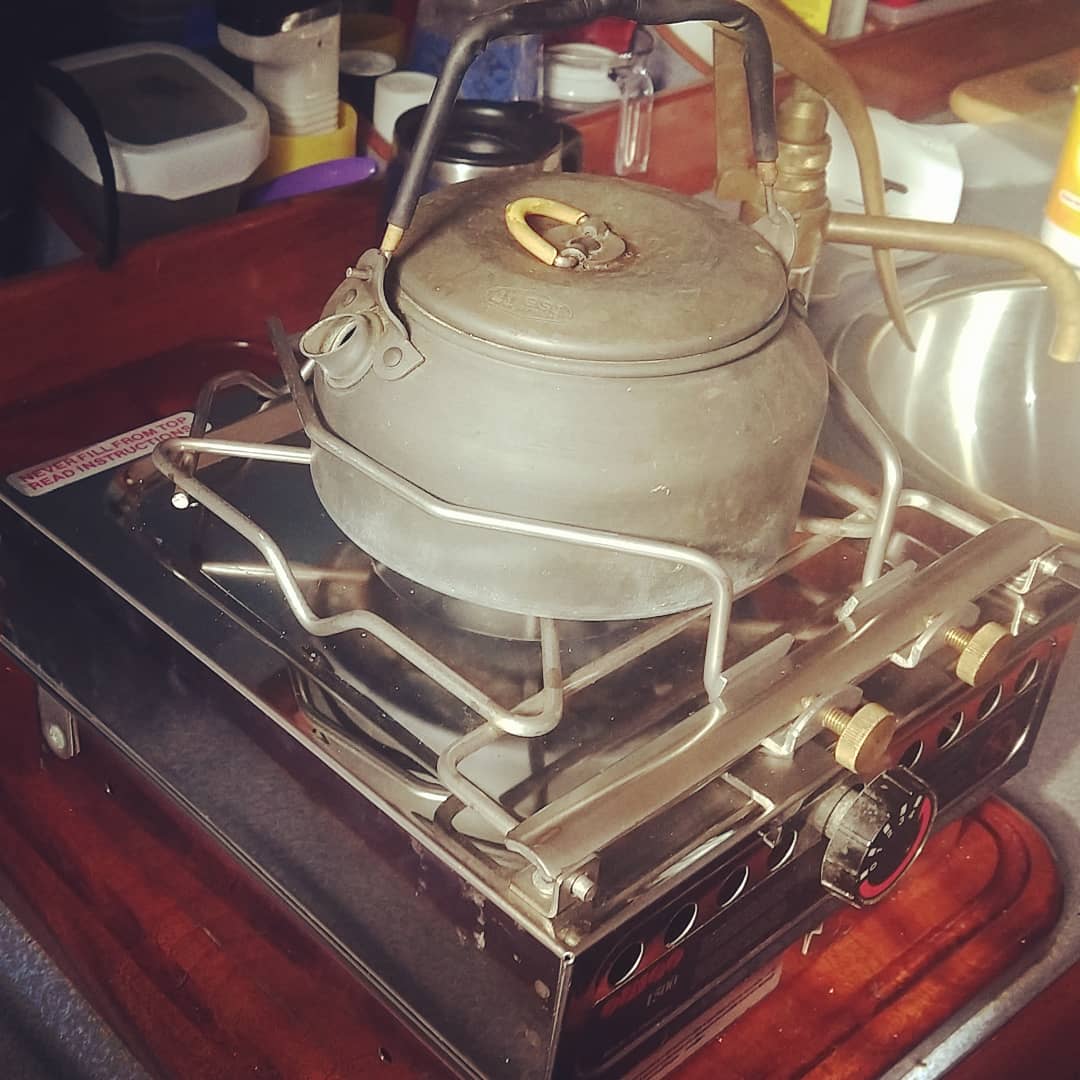 The stove is like new and shows no evidence of having been used – not even heat discoloration around the burner! So out went the butane stove and in the alcohol Origo.

I’ve been very happy with the new-to-me stove. It takes about two-to-three minutes longer to heat the morning water for coffee, 1/3rd more time, but the cooler and more adjustable flame makes cooking easier (butane is very hot and scorching is a problem).

The Origo can be gimbled so before they become unavailable I’m going to buy the adapter kit. Sometime in the future I’ll do some significant surgery to the galley to allow for a swinging stove.